Patrick Lichty and Mat Rappaport
24 Hour Psycho (With Apologies to Douglas Gordon)
twenty-four, one hour video files and forty-one blank yard signs modified by neighborhood residents in response to the video over a period of six weeks in the fall of 2017

As of 2018, the 41 community generated yard signs from this project are part of the Newberry Library Chicago Protest Art Collection.

Description
In a time of 24 hour news and an unpredictable national leader, Lichty and Rappaport have created a piece which provokes and invites viewers to respond to our current political context. The video, an early press conference in which Donald Trump was unable to “stay on message” has been extended to play as a twentyfour hour loop. Installed in a residential basement window as part of the 2017 Terrain Biennial, the image of Trump is a horror looming in wait. Audience members are invited to mark blank yard signs with their messages and responses. The structure video borrows from the famous Douglas Gordon video of Alfred Hitchcock’s film Psycho which stretched the film’s run-time to 24 hours. 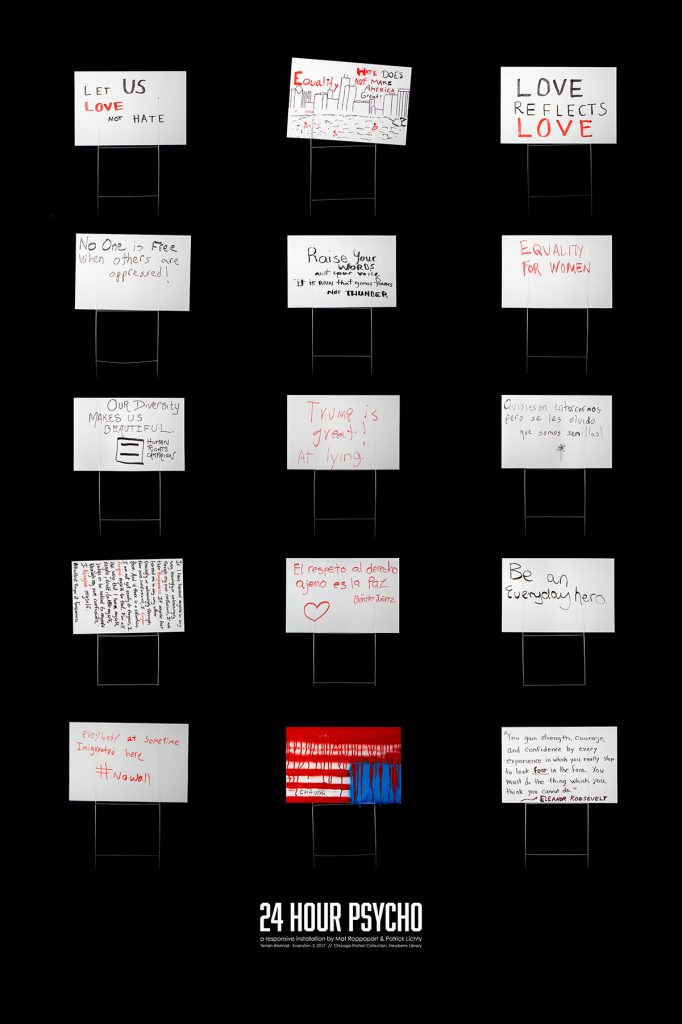 24″ x 36″ Edition of 24. Each signed and numbered poster features fifteen of the the forty one community generated protest signs on a black background.

Lichty Bio
Patrick is a conceptual artist, curator, and theorist exploring how media shape our perception of reality as well as the borders between the digital and the materal. He is best known for his work with the virtual reality performance art group Second Front, and the animator of the activist group, The Yes Men. He is a CalArts/Herb Alpert Fellow and Whitney Biennial exhibitor as part of the collective RTMark. Lichty has presented and exhibited internationally at numerous biennials and triennials (Yokohama, Venice, Performa, Maribor, Turin, Sundance), and conferences (ISEA, SIGGRAPH, Popular Culture Association, SLSA, SxSW).

Rappaport Bio
Mat Rappaport’s artwork has been exhibited in the United States and internationally in museums, galleries, film festivals and public spaces including the United Kingdom and the former Yugoslavia. His current work utilizes mobile video, performance and photography to explore habitation, perception and power as related to built environments. Rappaport is a co-initiator of V1B3 [www.v1b3.com], which seeks to shape the experience of urban environments through media based interventions.

Rappaport has published essays in the iDMAa Journal and a chapter in the book Beyond Globalization: Making New Worlds in Media, Art and Social Practices by Rutgers University Press.

Rappaport’s photographic work is included in the Midwest Photographer’s Collection at the Museum of Contemporary Photography in Chicago. He has received fellowships from the School of the Museum of Fine Arts Boston, Howard Foundation, the Mary L. Nohl Fund, the Montgomery County Ohio Cultural District, and University of Wisconsin Milwaukee’s Center for 21st Century Studies. Rappaport received his MFA from the University of Notre Dame. Rappaport is an Associate Professor at Columbia College in Chicago.